A Young Woman’s Work History: No Job Beneath Her 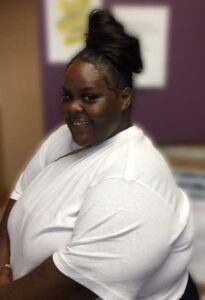 Dominique was referred to AACF by her high school science teacher, Ms. Thompson, at the Austin Career Education Center located in Chicago’s Westside, when she went to her with the statement: “I need a job.” Ms. Thompson let her know about AACF’s job training and job placement services. Soon after learning about the organization Dominique visited AACF’s office in Oak Park and filled out paperwork.

Thus began her journey with the youth workforce development program that has ended with her recent promotion to store manager at Wendy’s. AACF is very proud of Dominique’s hard work and tenacity which has earned her the success she deserves!

After hearing about AACF’s youth workforce program from Ms. Thompson, Dominique came to the office and registered as a youth program participant. She was called in to begin the program a couple of weeks later and attended a computer lab workshop, where she learned the ins and outs of business. Towards the end of the workshop she teamed up with a partner to create a Power Point presentation of an imaginary business designing and selling shoes.

After completing the workshop Dominique was placed in a job in H.I.M. Learning Center, a childcare center in Maywood Park. She loved working at the childcare center and was there for one year working as a cook and a classroom assistant until the business relocated to another state.
When that happened Dominique knew where to go for job finding assistance.

She returned to AACF and was placed in Cradle in the House, another childcare center in Bellwood. While working there she received her Mandated Reporters License, her Hands-on Nutrition Certification, and her Sanitation License. Later that year Dominique was placed in a temporary job at the Maywood Police Station as an overnight clerk, answering phones and issuing overnight parking permits. Additional temporary placements through AACF included MacArthur’s Restaurant, serving up comforting soul food and for Solo Cup Company making plastic ware in their factory.

Around this time Dominique took time off from work and had a baby. She returned to AACF when she was ready to go back into the workforce and was placed as a cashier in Wendy’s restaurant and has been promoted to a store manager position, receiving cross training on all of the roles in the restaurant.

Dominique now recommends many of her friends to go to AACF to receive job training and placement assistance. *”Without AACF I would have given up. It was like they became a family. **[The staff at AACF] **always told me ‘Never give up. - Girl, you can DO it.’ And they do. Even if they have to take you there, they will make sure you reach your goal… I just love my AACF family!” * - Dominique, when asked about her thoughts on AACF

*”I try to help youth as much as possible … and provide lots of support. I feel like we are their surrogate family member and that support is key for them to be successful.”* - Evelyn Mensah, President of AACF