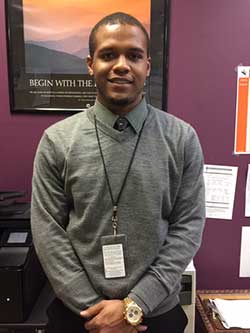 AACF is proud to congratulate Arif Longe, a former program participant and an employee with the organization, for recently securing a government job in Chicago’s Thompson Center.

Arif is grateful for the transferrable skills he learned as an AACF intern. He cites his experience as being a large part in landing his new position as Office Clerk for the State of Illinois essential skills that he uses in his new role.

Arif entered into the Youth Employment and Entrepreneurship Program at AACF three years ago after learning about it from his brother, a former participant. Before coming to AACF, Arif attempted college, unsuccessfully returning home to an empty promise, and broken dreams, but guaranteed encounters with the justice system. After completing the program orientation and workshops, Arif quickly landed an internship position as a book publishing assistant and later as an overnight parking clerk at a local police department through AACF’s placement services. His hard work, responsibility, and ability to learn quickly were apparent at AACF. He was offered a position as a front desk clerk with the organization and encouraged to continue his job search. His job duties at AACF soon grew to include training new program participants and serving as a mentor to new clients.

“I was once this kid… I was once in his shoes.” - Arif, on what aided his decision in becoming a mentor at AACF. Arif explained that being involved in training new program participants also directed him to the state government at the Department of Human Services, an area where he thought he would like to work. Thus began his thorough job application process with the State for two years before landing his current role. Arif will be eligible for the Upward Mobility Program after a probation period as a State employee. This program will cover the cost of two college courses per semester. Arif plans to utilize this program to obtain his bachelor’s degree in Business Administration finally. He hopes to eventually be able to transfer to the Department of Human Services to assist people who need job training and assistance - as he once was when he first walked through the door of AACF.

Arif is appreciative of his experience at AACF, which gave him the training as well as the skills needed for his current job. Some of the professional job skills Arif cites as having learned while at AACF are:

“My experience at AACF has helped me tremendously in working for the State, especially handling sensitive information.” Arif

Arif had a few months’ gaps in between working for AACF and landing his current role with the State where he worked as a delivery driver and a bartender. During this time, he remained in close contact with the staff at AACF, occasionally receiving assistance from the organization and being available to assist the office with odd jobs. “I would not have been able to make it without AACF’s help during this time.”

Arif hopes to one day start his own not for profit to aid people in attaining job training and assistance and remains loyal to AACF by offering his help to the organization in any way that he can. He states, “I’m only a phone call away.” - on reaching out to him when he is needed.